The image here is a poster for a new film called "At Death's Door" (Mati Suri).

What do you see in the image? 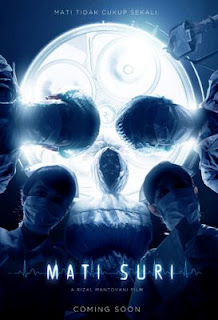 When Richard Wiseman posted this picture on Twitter he claims to have had a 'strange reaction', in that few people could initially flip between the two images - most could only see the one. He then copied a few more similar images and somehow this rather spoils the experiment as people are then trained into being able to see the optical illusion.

"At Death's Door" is a film about a woman's near death experience (NDE). Unfortunately, the film sits squarely inside the horror genre so that the NDE is frightening, leaving the woman depressed and disconsolate. There may be an element of moral retribution here for her attempted suicide. On the advice of a friend, she goes to recuperate in a sanatorium only to find it haunted with spirits. The only way she can save herself is to die again.

I have to admit a certain distaste for most horror films. They are simulations of fear without any instructive elements about how to deal with one's own horrors. I would guess most of us have had nightmares at some point in our lives. There are simple and effective ways to resolve such nightmares, leading to some catharsis or revelation. To indulge in ersatz nightmares is to leave oneself open and largely defenceless against the real thing. The film's 'second death' does, however, have a certain psychodramatic truth to it. I haven't seen the film as yet, and trailers are notorious for misrepresenting a film's true intentions, but will look out for it on DVD.

Going back to the NDEs, research on near death experiences has shown that very very few people have negative experiences - something like just 1% - so that the very premiss of the film is flawed. The process of dying may be painful or terrifying depending on circumstances (such as having an accident) but death itself, or that intermediate state of near-death, is neither painful nor frightening and most people come out of the experience shorn of any fear they may have had about their mortality.
Posted by Unknown